Suppose we have a function g (x) whose derivative.

The function g (x) is known as the indefinite Integral of f (x) and is denoted as:

1/d is usually abbreviated by the symbol ∫ (called integral), so one can write

Here c is called constant of integration. Its value is arbitrary and can be calculated form the information given in the problem.

Integral of the form 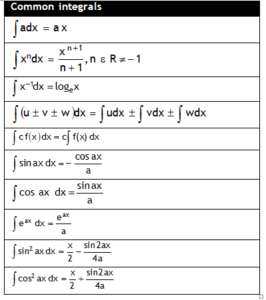