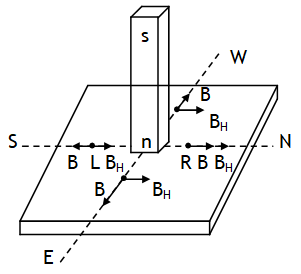 Horizontal component of earth’s field is towards

. When the magnet’s north (n) is towards earth’s south (S), then magnetic field of the magnet will be towards opposite to that of BH & both get cancelled at a point somewhere on the axial line of magnet & thus two neutral points (shown by cross marks) are obtained on the axial line (i.e. towards geographic north south line). If neutral points are situated at distance r from the centre of the magnet then at these points we can write

On reversing the magnet i.e. when magnet’s north (n) is towards earth’s north (N), two neutral points are obtained on the equatorial line (i.e. towards east – west line). At these points we can write

^Cause of earth’s magnetism ^Tangent galvanometer Scroll to top
error: Content is protected !!