The total voltage difference between two points where temp. are T0 ­ and T, from equation (1), is given by 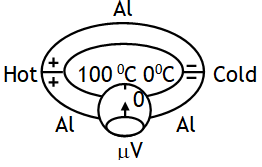 In practice one rarely measures the absolute thermopower of the material of interest. This is due to the fact that electrodes attached to a voltmeter must be placed onto the material in order to measure the thermoelectric voltage.

The temperature gradient then also typically induces a thermoelectric voltage across one leg of the measurement electrodes.

Consequently no net voltage will be registered by the voltmeter.

Here SAB is defined as the thermoelectric power for the thermocouple pair A – B.

The thermopower is an important material parameter that determines the efficiency of a thermoelectric material. A larger induced thermoelectric voltage for a given temperature gradient will lead to a larger efficiency. Ideally one would want very large thermopower values since only a small amount of heat is then necessary to create a large voltage. This voltage can then be used to provide electric power.

Typically metals have small thermopowers because most have half-filled bands. Electrons (negative charges) and holes (positive charges) both contribute to the induced thermoelectric voltage thus canceling each other’s contribution to that voltage and making it small. In contrast, semiconductors can be doped (adding impurities) with an excess amount of electrons or holes and thus can have large positive or negative values of the thermopower depending on the charge of the excess carriers.