The various rays in a wide beam falling on a concave mirror of large aperture after reflection don’t meet at a single focus, marginal rays get focused somewhere between F & F while paraxial between C & F , consequently the image formed is not bright & single but a large no. of blurred images are produced. 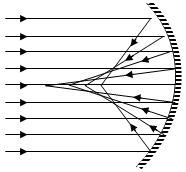 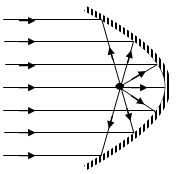 In order to minimize the spherical aberration defect we shall use

(a)  Objects with low heights