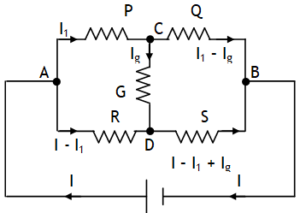 , then VC = VD & the bridge is said to be balanced i.e. the potential difference across the arm CD is zero, consequently no the current through the arm CD & thus arm CD can be removed. Also the position of cell & galvanometer can be interchanged.

, then VC ≠ VD & bridge is said to be in the unbalanced state. If

then current flows from up & if

then current flows down.

3. Wheatstone bridge is said to be sensitive if all the four resistances are of the same order i.e. when the current in the four branches is of the same order. In this case error associated with the measurement of X is mini.