A common experiment to study interference of two light waves is YDSE. In this experiment overlapping of wave fronts of light waves coming from two slits S1 & S2 is studied by placing a screen at some distance from the slits. Let slits are separated by a distance ‘d’ & screen is situated ‘D >>d’ distance away from slits. Wavefronts reaching O from S1 & S2 are of equal path length produce no phase difference & thus we get maximum intensity at O (called central maxima, CM). 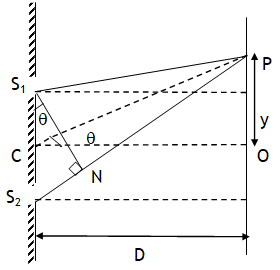 Phase & path difference for a sinusoidal wave are related as

For two waves of equal intensities the intensity of the resultant wave varies as square of the cos of Φ/2 i.e. 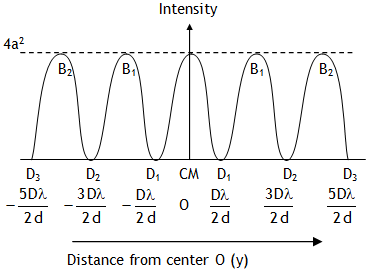 Here 4a2 is the maximum intensity of the resultant wave at central maxima. 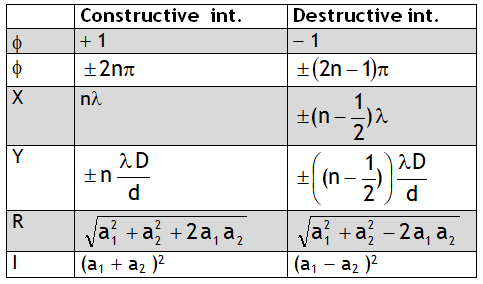 1. Fringe width of any dark or bright fringe is same & is

2. When interference is studied with white light, each of the seven colours produces its own fringe pattern, having different fringe width & due to overlapping blurred fringes are observed. However central fringe is white, on either side the nearest fringe is blue and farthest fringe is red & then uniform illumination.

3. If a transparent sheet of thickness ‘t’ & refractive index ‘m’ is introduced in one of paths of interfering waves, the entire fringe pattern displaces towards the side in which the sheet is inserted by a distance

without any change in the fringe. 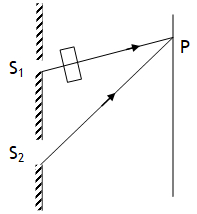 Also no. of fringes shifted is 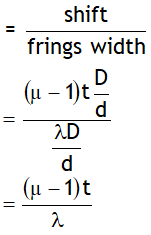